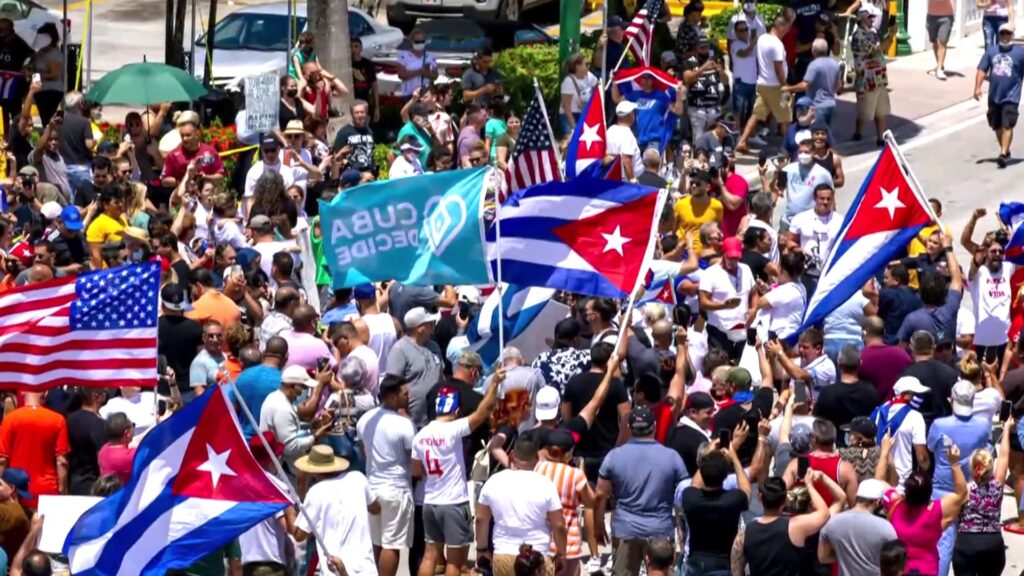 Cuba is fighting back for its freedom!

What a crazy turn of events these past few days. Fear is plaguing the hearts and minds of many Americans these days.

According to reports, the people of Cuba have had it. They’re over their lack of freedom and deteriorating economy. Basically, they’re over the very things some misinformed Americans seem to be pushing for in our country—Communism.

We are living in a time where our freedom is being threatened. We’re slowly and methodically losing our control over things that we perhaps took for granted. Our children’s education is just one example.

Sin happened. It’s been happening since the fall of Adam. We are all guilty of falling short of the glory of God. (Romans 3;23) But, no matter how we go here, we need to determine how to respond. We have to figure out what we’re going to do. But what stops people from taking those action steps? What prohibits people from standing firm and marching forward in the way they know is right?

Fear is a crippling and debilitating enemy. It can immobilize even the most motivated and powerful people. It’s also a liar. Though we know the truth of who we are in Christ and the power we wield because of Him, fear will tell us we’re useless and powerless. Fear will cause us to believe that we’re unworthy of anything good. Fear will even tell us that we deserve the bad things that happen to us and our children. And when fear takes its grip, we lose our fight. We lose our drive to push back on the looming threats to ourselves, our family, our communities, and our freedom.

Looking at what’s going on in Cuba, we can recognize an antidote for combating fear. It’s called desperation. Allow me to explain.

Do you think the Cuban people aren’t afraid? Do you think they’re not experiencing a fear so overpowering it could become debilitating? What in the world is causing them to take to the streets and shout that they’ve had enough?! Desperation—that bottom of the barrel we sometimes have to hit before we’re shaken awake and motivated to change our circumstances. That, “it’s now or never/go hard or go home” mentality.

Desperation is an uncomfortable feeling. That’s good. If it felt comfortable, we’d stay in it, lamenting our plight.

If fear is a liar, then desperation is a truth-teller. Desperation tells no lies. It paints a very clear and accurate picture of the state of things—no sugar-coating. And when you have an accurate view from the bottom of that barrel, and you’ve had just about enough…ahh, that’s when the good part starts. That’s when the fight kicks in. That’s when you take to the streets Cubano-style and rattle the system. It’s a beautiful thing.

The Bible says in 2 Timothy that “God gave us not a spirit of fear but of power and love and self-control.”

We don’t know how many Cuban protestors know God. People possess a certain amount of fight without Him. But, we possess all of the fight with Him. “We are more than conquerors through Him who loved us.” (Romans 8:37)

We’re in unpredictable and potentially treacherous times. But God is sovereign! He knows the end from the beginning and is caught off guard by absolutely nothing. The same God who parted the Red Sea, enabling the Israelites to walk away from their enemies on dry land, is alive and well today, and He is ready and able to part some seas.

So…FIGHT! Walk on dry land to that school board meeting to protest the indoctrination of your children. Walk on dry land to your place of business that’s threatening your livelihood because you’re choosing to make your own medical decisions. Walk on dry land into the struggles you’re facing that are causing worry and anxiety. The battleground upon which we must fight for our freedom is dry because God parted the sea for us!

“Come to me, all who labor and are heavy laden, and I will give you rest.”

And most importantly, Galatians 6:9 says,

“And let us not grow weary of doing good, for in due season, we will reap, if we do not give up.”

Let the weariness and desperation fuel you. Fear is a liar and the enemy. We’re stronger than that.